Maine keeps on bringing the surprises. Last night at 12:13, I was awoken to the inquisitive footsteps of a small animal. I have no doubt it was enticed by my food bag hanging a paltry seven feet above ground in a nearby tree. I was only slightly alarmed and wrote off the footsteps thinking they belonged to a harmless fox. Sleep went in and out as did the footsteps until I decided I had had enough. I got out of my warm bag and retrieved my food bag. Secured in my pack, it was protected by the vestibule of my tent only inches away from me. I went back to sleep thinking the small animal would not have the courage to investigate further. I was right. But another, larger animal did only a few hours later. I heard it breathing maybe 15 to 20 feet away as it circled my tent. Judging by the sound it made moving compared to the first animal, I feel safe saying this was no fox. For the first time since Georgia, I was scared inside the usually safe confines of my tent. I did not move; the beast continued circling. At this moment I was scared, when the mystery animal charged my tent, I was terrified. It came to within a few feet before I yelled out and clapped my hands. I heard it run away and break a few branches in it’s retreat. I reached for my headlamp and turned it on before securing it to my shaking forehead.  I still heard the animal moving away from me as I unzipped my tent and peered out into the darkness. For some crazy reason, I actually had to restrain myself from running after it. In my excited stupor, I had emerged from my tent and was now standing about 10 feet away in a thicket of woods dimly lit by my inadequate headlamp. I was shaking from anger more than fear. I got back in my tent and prepared myself should it return. I slept with my headlamp on for the rest  of the morning. I honestly didn’t know what my visitor was. I’d assume a bear but maybe it was just a steroid induced chipmunk. Either way, I didn’t sleep well and decided to pack up and go just before light. I actually hiked with my headlamp on for about 30 minutes until it was light enough to see without it. I was planning on leaving early anyway because I had to catch the Kennebec River ferry (a canoe) between 2 and 4 PM and it was 19 miles away. 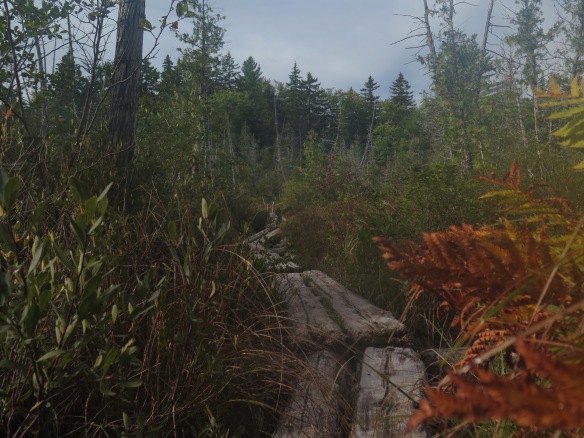 The trail today was rather uneventful and mostly flat. I made 15 miles by noon, a personal best, and arrived at the ferry crossing a few minutes before two. Hikers used to have to cross the river on foot but due to a few instances of hikers drowning, the ATC runs a free ferry service across the river now. I was more than happy to hop in as the town of Caratunk lay just on the other side of the river. Once across, I was able to resupply, shower and enjoy a calorie laden hamburger at the Sterling Inn. 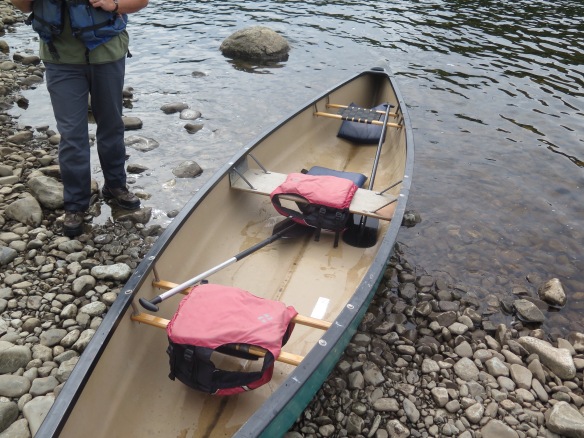 Kennebec River Crossing – note the white blaze in the canoe