After saying goodbye to the fine folks over at the Farmhouse in Rangeley, it was time to hike. The weather was still holding out and it looked like it would be another clear day. I was excited to get going. For the third day in a row, I chose not to wear my knee braces because of the blisters and I could definitely tell the difference with them on or off. After entering the woods on the other side of Highway 4, I came to the Piazza Rock Lean-To and campsite. It was probably one of the nicest campsites I’ve seen and hosts a nearby trail that takes you through some caves. I would’ve liked to stay and investigate but I really wanted to take advantage of the good weather. There’s also a cool looking rock formation called Piazza Rock. I took a picture under it before moving on. 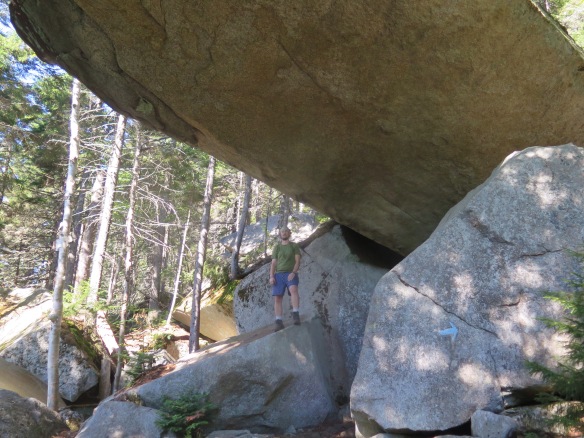 Most of my day would be spent climbing Saddleback Mountain. The summit was amazing and looked similar to Franconia Ridge and Mt. Lafayette. From Saddleback, which was all above tree line, I could easily make out the trail over the other two mountains I would summit today, The Horn and Saddleback Junior. They lay just ahead in the distance and reminded me so much of the whites I enjoyed so much.

The views from The Horn and Saddleback Junior gave me a clear view of the Bigalow mountain range which I would be entering in a few days. Although I couldn’t see it, Katahdin rests several miles on the other side. I’m getting closer with every step but still try not to think about it. I really want to make better miles than what I have been averaging but I just don’t have it in me. The trail is still really tough and I’m worried about how much my knees can take. For now, 13 mile days will just have to do.